Your rights are just fine

On public discourse, straw man arguments, and the comments section

Good morning! On our small but mighty team, we’re unbelievably lucky to have the talented Jenny Rothenberg as COO. She’s good at everything she does and then some, but perhaps the most important of her contributions has been the phrase “it’s a great day to be a spider.” Jenny, a graduate of the University of Richmond (go spiders), has infiltrated our team vernacular with the simple yet effective eight words that seem to fit in any given moment of excitement, elation, or bliss.

I just published my first full video essay on YouTube. It’s a great day to be a spider.

My best friend in the world is coming to visit New York for the first time in six years today. It’s a great day to be a spider.

I finished a family-size bag of spinach myself before it went bad for the first time ever. It’s a great day to be a spider.

I hope you find a reason to invoke this Jenny-ism today. Let’s kick off the weekend with some thoughts, ideas, and vibes. It’s a great day to be a spider.

Stop Incorrectly Invoking the First Amendment Every Time You Disagree With Someone!! And Other Thoughts on Public Discourse

I hope you read that headline in the almost-scream I typed it. I know I’m usually committed to positivity or at least, like, reflection with some larger aspirational lesson baked into this newsletter. Today, though, I’m switching things up to talk with you about something that really, truly grinds my gears:

When people encounter something they disagree with online and, instead of respectfully weighing in or simply moving on with their lives, falsely claim infringement of their first amendment rights or some other nonsensical argument.

For as much as it drives me bananas, I have to give credit where it’s due: This is the perfect straw man argument. Nothing confuses people like referencing the Bill of Rights, right?

But rarely if ever are claims of violated first amendment rights legitimate. At least not the ones I see in my TikTok comments section. More on that in a moment, but first…

A disclaimer: I am not a constitutional law expert. I am not a media law expert. I am not an expert in any legal capacity aside from the two years I was captain of my high school’s mock trial team, years during which we only ever simulated cases having to do with 1) contributing to the delinquency of a minor 2) manslaughter or 3) first degree murder.

So when I see comments like those on my recent TikTok suggesting that I, someone who relies on the first amendment right to free speech every single day that I do my job, want to limit it…I see red.

I’ll sum up the TikTok: I read this piece in The Atlantic about the things author Sarah Hepola is afraid to write about. One bit in particular struck me:

“One of the great mistakes of our moment is being deemed “on the wrong side of history.” But has anyone read ahead in the book so they know how future generations will see this stuff? If so, can they please tell me, so I can choose my stance accordingly? Gender, sex, morality. Everything is guesswork.”

I read it, I was flabbergasted that it was published at all, and I made a TikTok in response conveying this idea: It shouldn’t be that hard to not be a sexist, a racist, an immoral person. There are many issues that require deep discourse and years of determining how to best proceed, but trying your best to not judge others unfairly and to treat people with respect and kindness really shouldn’t be that hard.

Afraid of being unfairly “canceled”? Then try your best to not be a bad person. It’s as simple as that. We all make mistakes, but waking up each morning and attempting to do right by others…it’s actually not that hard.

I thought it was a simple idea to communicate—if you’re afraid of being labeled a bigot, don’t be a bigot! But apparently the internet had other ideas. My comments section was flooded with things like this:

“Sounds like something Putin would say. That’s not what we say in America.”

“I thought the first amendment gave everyone the right to speak. Are you on the free speech approval committee?” (Editor’s note: what?)

“So I’m only allowed to say stuff that the majority of people agree with and say is morally right?”

“So what your saying it’s only freedom of speech when you don’t really say what you feel . got it” (Editor’s note: happy to recommend a book that might teach you a thing or two about grammar)

Now, I know that this is the burden I have volunteered to carry as someone who lives her life online and publicly talks about third-rail issues. I’m comfortable and even willing to take it on. I love that part of my life.

What drives me so crazy about the internet, though, is the lack of follow-through. When one of those dimwits (I’m sorry but that’s what they are) types out a comment about the FiRsT aMeNdMeNt, they hit send and likely move on to the next video with a smug little grin on their face, surely thinking they’ve taught this ignorant young woman a lesson.

When we make everything an argument but we’re never willing to see it through to the end, we lose the best parts of being so deeply interconnected: learning from each other. Engaging in conversations that expand our world views. Hearing perspectives that differ from our own.

The comments sections I see rarely celebrate that idea, and I wish so badly that they would or could. I found new ideas myself in the comments on that TikTok, and I saw how I could have expressed my perspective more effectively. I learned! And it was fun! And easy!

So I guess my point is this: The internet affords us so much. To waste the chance to hear someone out is, in a word, sad.

Oh also my point is this: The first amendment is, by design, not absolute. It’s also not even remotely close to what I was talking about. But even if it were? Just because you have the right to say something doesn’t mean you should. And by the way, me saying that? It’s not muzzling my dissenters, a group to which I’d like to pass along the following message: If you’re going to be dumb, you better be strategic. Find a different legal basis for your bigotry or, in the words of a very wise one-time presidential candidate…delete your account.

Thank you for reading! Perhaps shocking to nobody, that was longer than I expected it to be. But I recently promised you journal vibes (I believe “raw and honest” were the words) and that’s what this is.

One important programming note that is important and maybe I should have put at the top of this newsletter: 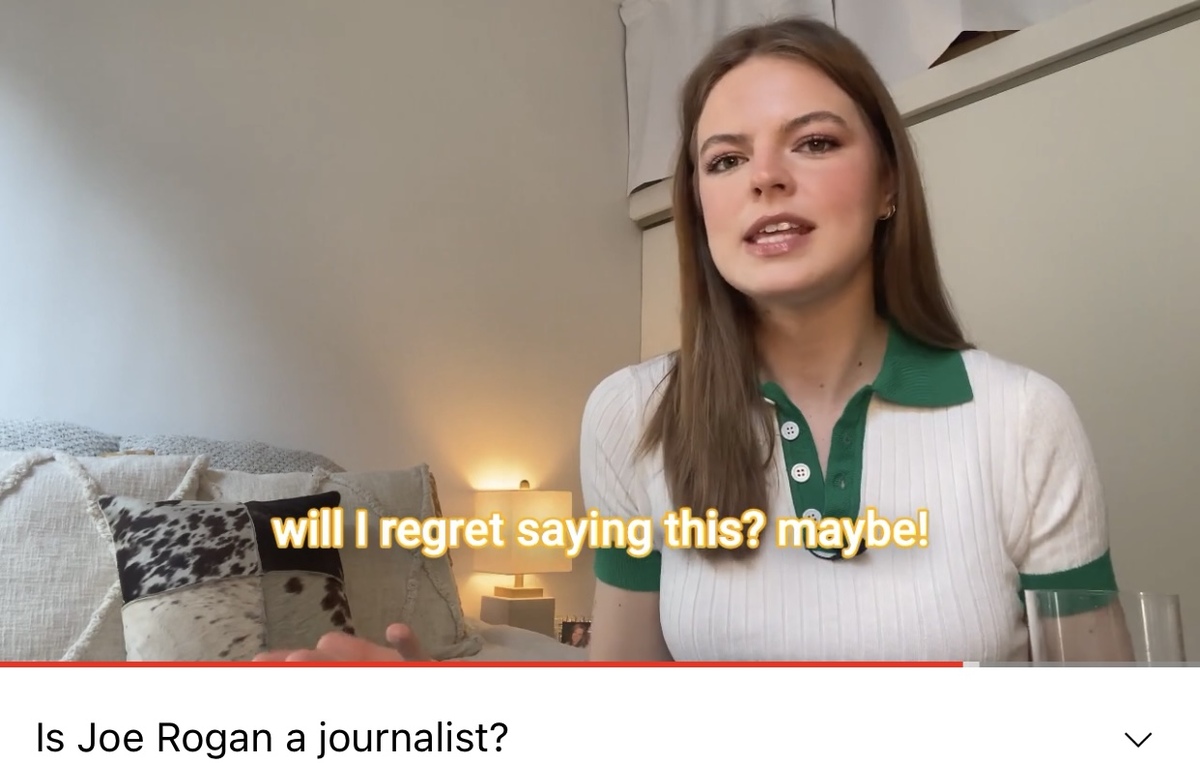 That’s all! Have a fantastic weekend, and I’ll see you soon.

What if we all stopped to think a little harder? To have conversations with each other? What might the world look like? I’m Kinsey Grant and together, we’re gonna find out.