It's always better to know

Do you know where the money you spend ends up?

It’s Friday Afternoon…Do You Know What Political Causes Your Favorite Brand Is Secretly or Maybe Not So Secretly Supporting?

Earlier today, I published a video on my YouTube (and a podcast in my podcast feed for you analog folks) detailing and analyzing the palpable silence coming from The Brands™ on the potential overturn of Roe vs. Wade.

After two years of “we’re with you in this fight”-ing their way to enviable profits, founders on the ESG investing interview circuit, and the kind of earned media that makes most marketing departments [REDACTED], the corporate America consensus on the possibility of women losing their bodily autonomy at the federal level is pretty much…nothing.

I go into more detail on why that’s *checks notes* bad in the video, so watch those 8 minutes 13 seconds for a fuller picture of the impact this relative corporate quietness might have on: 1) efforts to attract and retain talent in a post-Great Resignation world 2) consumer relationships and 3) any apparent track record of putting your $$$ where your mouth is.

(In fairness, I am from Florida so for obvious reasons ((R*n DeS*ntis vs. Disney)), I get why some businesses might think it’s better to zip the old lips—don’t condone it, do (((a little bit))) understand it.)

BUT! Just after I hit publish on that video this morning, I set out on my routine lap around the internet to see what else was [pick one: on fire, collapsing, losing value at an astonishing rate, goin’ on]. In my inbox, I came across the entrypoint to a rabbit hole I’ve still not dug myself out of:

In this morning’s DealBook newsletter, an introduction to the paper trails that might tell us which companies of note are funding, whether directly or indirectly, anti-abortion politicians.

The details up close:

This morning, as I read DealBook, mouth agape, I asked my works-from-home-on-Fridays boyfriend which companies he thought might give to anti-abortion lawmakers. His first guess? Disney.

And that’s why he’s a keeper.

A prime example: Disney is apparently the king of all talk, no action. In 2019, CEO Bob Iger said Disney might consider ceasing any filming in Georgia because of restrictive abortion laws there. But (there’s always a but)...

But the fact that their money ended up in the grimy hands of lawmakers who have also worked to snatch away healthcare rights is nauseating.

Today, I am upset that I watched the first 45 minutes of Hannah Montana: The Movie on Disney+ earlier this week. That’s because I’m more than just upset (perhaps outraged is a better word here?) at the anti-abortion agenda’s massive dismissal of women’s rights in this country.

But I’d never thought to research what kind of politicians Disney was supporting when I watched the first 45 minutes of Hannah Montana: The Movie on Tuesday. It’s a good lesson in conscious consumption that goes beyond, I don’t know, calculating cost per wear of that Aritzia bodysuit you really want that your sister told you would make you look like Leelee Sobieski’s character in Never Been Kissed. 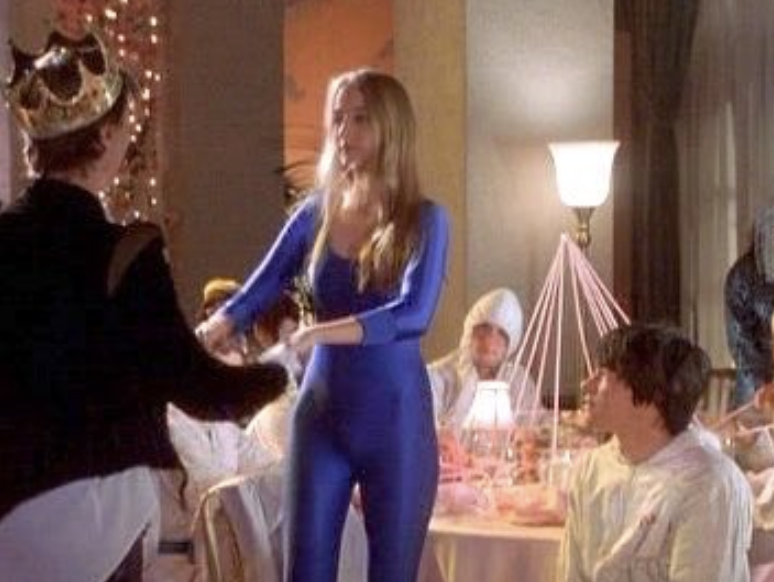 idk still a vibe if you ask me

It makes me wonder what it might really take to be a thoroughly thoughtful consumer in the year of our lord 2022. It can feel daunting to consider all the steps:

I get it, it’s a lot. And I don’t want to suggest that I’m going to Google “did sweetgreen donate any money to anti abortion lawmakers 2022” every time I’m preparing to scarf down a kale caesar. But I still think it’s always better to know. So I’m going to do my best to know.

It’s better to understand that corporations do more than stream our favorite films from 2009 or sell us things that stock our closet or peddle, like, Cheez-Its. They have an active role in the direction of this country, and for that reason they should be held to account.

Business might try to say it’s apolitical, but “apolitical” is a made-up concept. Corporate America, armed with so much money it’s quite frankly impossible to adequately communicate, has the power to determine the path we take.

In my video I put out today, I said it’s important that we speak publicly about the ways corporate America is and isn’t putting its money where its mouth is. It’s also on us to put our own money where our own mouths are.

Thank you for reading! As I mentioned before, I’ve been stocking the YouTube and podcast feeds with lots and lots of content—interviews, news analysis, short-form video, etc. I hope you’ll watch my Roe vs. Wade piece and subscribe to my channel.

ALSO: Today’s email is dedicated to my friends at beehiiv, the newsletter platform on which I send this…newsletter. Beehiiv is an indispensable tool for me, and the team behind the tech is really, truly the best out there. They’re creative, intuitive, thoughtful—everything good. If you’re thinking of starting a newsletter (just do it who’s going to stop you), consider beehiiv*.

*This isn’t a paid promotion, I just really feel gratitude for the beehiiv team, which has been through the unthinkable this week. Tell your friends you love them!

And tell yourself I love you, because if you read this top to bottom I probably do. See you next time!

What if we all stopped to think a little harder? To have conversations with each other? What might the world look like? I’m Kinsey Grant and together, we’re gonna find out.